Metabolic diseases such as obesity have been on the rise during the last decades, reaching worrying levels. Several statistics point towards an even worse future, where several European countries are expected to reach 70% of obese population, in the next 15 years. Obesity is characterized by an abnormal accumulation of fat and is associated with other co-morbidities, such as diabetes. Several causes are appointed for this vertiginous increase including sedentarism and an increased intake of energy-dense foods rich in carbohydrates. Following an inverse trend, fertility rates and sperm parameters of reproductive-aged men are decreasing, evidencing a relationship between both events. In fact, reproductive function is sensitive to energy balance; however, the molecular mechanisms that associate obesity and reproductive dysfunction are still undisclosed [1]. Leptin, an adipocyte-derived hormone, is upregulated in overweight and obese individuals [2]. Besides the well-described actions in the hypothalamus, leptin has important actions in several peripheral tissues. However, despite the focus in leptin during the last two decades, its role in testicular cells is still undisclosed. Recently, our group has identified the leptin receptor in human Sertoli cells (SCs) and demonstrated that leptin modulates human SCs glycolytic profile [3]. Furthermore, several studies have reported leptin’s ability to modulate mitochondrial biogenesis and dynamics [4].

In this study, we studied the potential role of leptin in mitochondrial dynamics and biogenesis in rat and human SCs. SerW3, a rat Sertoli cell line, and Clonetics™ human SCs cultures were established. Once rat SCs reached 80% confluence, they were divided in 4 different groups and incubated with different leptin concentrations during 24h. One group was treated with Sertoli cell medium without addition of leptin while the other groups were treated with 3 different leptin concentrations (5 ng/mL – normal plasmatic concentration, 25 ng/mL –concentration found in obese individuals and 50 ng/mL – supraphysiological concentration). This procedure was repeated for human SCs. In human SCs the concentration of 50 ng/mL mimics the levels found in morbidly obese individuals. Afterwards, cells were tested for mitochondrial membrane potential (JC-1 assay), protein expression of mitochondrial complexes (Western blot) and expression of genes involved in mitochondrial biogenesis (qPCR).

Our results show that high concentrations of leptin, found in morbidly obese individuals, modulate mitochondrial function in rat SCs. This could illustrate a novel mechanism through which leptin affects the male reproductive potential in obese male individuals. Notably, some differences obtained are species-dependent illustrating different responses to leptin exposure from rat and human SCs. These differences, particularly in SIRT1 mRNA levels, could also suggest leptin’s involvement in the metabolic control of spermatogenesis. 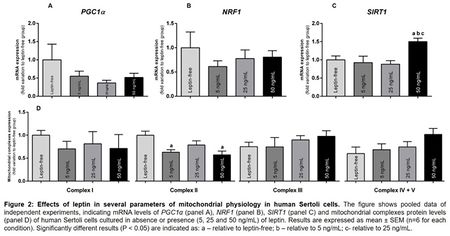