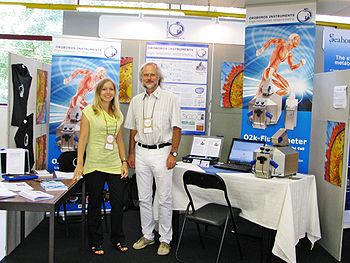 This study describes a low-noise, rapid spectrophotometric system using visible light (440-605 nm) for the measurement of cytochrome redox state combined with high-resolution respirometry. The system was tested in an investigation using beef and mouse heart isolated mitochondria (BHImt, MHImt) in order to determine the relationship between respiratory rate and cytochrome redox state at steady-state levels of hypoxia. Monophasic hyperbolic relations were observed between respiratory rate, j (with glutamate+malate and saturating ADP concentrations), and oxygen partial pressure, pO2, in the range <1.1 kPa for both BHImt and MHImt with p50,j (pO2 at j = 0.5 Jmax) of 0.015 and 0.021 kPa respectively. The oxidation fractions of cytochromes aa3 and c were biphasic hyperbolic functions of pO2. The relationships between cytochrome oxidation states and j were more complex with an initial steep decrease in the oxidation fraction of cytochrome c to a value of j of approximately 0.7 followed by a plateaux and a further steep decrease at j < 0.2. This relationship was less apparent with cytochrome b redox state. Using these functions, it was possible to create a model that successfully described the measured relationship between cytochrome oxidation state and oxygen consumption.

Mitochondrial membrane potential (mtMP) is closely intertwined with oxidative phosphorylation (OXPHOS). The exact nature of the interactions of respiration (flux) and mtMP (force) under various physiological and pathological conditions remains unclear, partially due to methodological limitations. We introduce the combination of high-resolution respirometry and fluorometry with the Oroboros Oxygraph-2k, using the widely applied mtMP indicator safranin. OXPHOS analysis with mouse brain homogenate revealed that safranin inhibits Complex I linked OXPHOS capacity at commonly applied concentrations and targets primarily the phosphorylation system, without effect on LEAK respiration. Complex II linked OXPHOS capacity was inhibited by <20% at 2 µM safranin sufficient for mtMP monitoring. mtMP was higher in the LEAK state without adenylates (LN) than at identical LEAK respiration after ADP stimulation and inhibition by oligomycin (LOmy). Maximum ET capacity was reached in uncoupler titrations before mtMP was fully collapsed, whereas respiration was inhibited at increasing uncoupler concentrations and further reduction of mtMP. Examining a pharmacologically induced state of Complex II dysfunction, mtMP was rather insensitive to 50% inhibition of OXPHOS, but responded strongly to addition of inhibitors when respiration was minimized by substrate depletion. The optimum uncoupler concentration supporting maximum ET capacity varied as a function of pharmacological intervention. Taken together, combined measurement of respiration and mtMP greatly enhances the diagnostic potential of OXPHOS analysis. Respirometric validation of inhibitory and uncoupling effects is mandatory for any fluorophore applied for probing mtMP, in any respiratory state, type of tissue and pathophysiological condition.

Krumschnabel G, Eigentler A, Fasching M, Gnaiger E (2014) Use of safranin for the assessment of mitochondrial membrane potential by high-resolution respirometry and fluorometry. Methods Enzymol 542: 163-181. »Pubmed 24862266